The City of Missoula Transportation Safety Team, comprised of planners, engineers, and Street Maintenance Division staff, meets regularly to improve safety and operations for people walking, biking, and driving. Major improvements like new traffic signals, roundabouts, bike lanes, and travel lanes are typically addressed through large scale projects included in the annual Community Investment Program. The Transportation Safety Team focuses more on local streets, requests for marked crosswalks and crosswalk enhancements, known crash locations, and other emerging issues. The projects below reflect some of the work the Transportation Safety Team has performed in 2020.

When local business owners brought safety concerns about this intersection to the TST, we determined that several parking spaces in the vicinity violate federal, state, and local laws about parking too close to crosswalks. Instead of just pulling the parking, City staff and neighborhood advocates envisioned a people-first intersection that improves safety while enhancing the charming character of the neighborhood. This project includes high visibility marked crosswalks with temporary curb ramps to enhance accessibility, curb extensions to shorten crossing distances, and colorful parklets with bike parking, public seating areas, and art. Preliminary drawings of the current site and proposed changes can be found here.

In August 2020, the project was awarded a grant for $12,500 from the AARP Community Challenge. The project was then able to move forward to the design stage with an anticipated construction date in spring 2021. 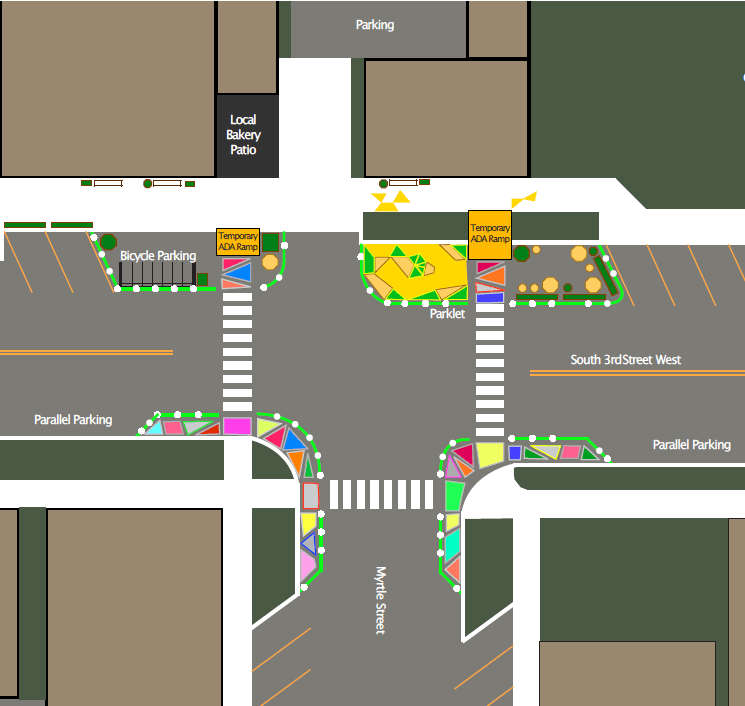 After a pedestrian was struck by a driver while crossing S. Russell St. near the YMCA during morning rush hour in late 2018, the City has been investigating, planning, and collaborating with the Montana Department of Transportation (owner of the street) as well as with private businesses like the YMCA and Opportunity Resources, Inc. to improve safety at this crosswalk.

During the summer of 2020, the Public Works Department installed temporary rectangular rapid flashing beacons (RRFBs) at the location. The temporary RRFBs will remain in place until a permanent, engineered solution can be determined and funded.

As the Riverfront Triangle Project develops, a much-used pedestrian tunnel under W Broadway connecting to St Patrick Hospital had to be closed, forcing even more people to cross the street at an already busy intersection. The TST worked with the Montana Dept of Transportation to install temporary rectangular rapid flashing beacons (RRFBs) on the west leg of the intersection.

During the beginning of the Riverfront Triangle Project, a much-used pedestrian tunnel under W. Broadway was removed. This left many people who park off of W. Front St. and Owen St. south of W. Broadway with no nearby signalized crossing of W. Broadway. After trying several methods for trying to get motorists to yield to pedestrians on W. Broadway, Public Works installed temporary rectangular rapid flashing beacons (RRFBs) just west of Owen St. Once the Riverfront Triangle Project reaches the point of addressing this portion of the south side of W. Broadway, the project must address and install a permanent solution to the pedestrian crossing. This likely will include permanent RRFB installations.

The process for installing traffic calming features generally begins when the TST receives reports from citizens regarding crashes, near misses, potential speeding problems, and other traffic safety issues. TST takes a comprehensive look at the reported problem by gathering information such as reported crash pattern data, traffic speeds, traffic volumes, sight distance measurements, and any other relevant details that could help the team determine the best possible solution. Once a solution is identified, the Team strives to implement the solution with current resources.

Six total of these new traffic calming circles are currently in place on Franklin St. and Maurice Ave. as part of a larger neighborhood traffic management program, which is still in development. See project descriptions below.

Several citizens reported crashes, near misses, and speeding on Franklin St., and TST had to consider many factors when they tried to find a solution to these problems. One problem is that the street is considered a primary fire route for the fire station on Mount Ave., so stopping traffic on Franklin was not an option. In addition, the street is part of the City's Neighborhood Greenway route, which means it has relatively low vehicle volumes and speeds to help increase comfort for people who bike and walk on the street. The addition of lightweight traffic calming circles at Woodford St., Rollins St., and Longstaff St. and stop signs at the uncontrolled intersections seems to check all the boxes for successful traffic calming on Franklin St. See project drawings here.

The TST also received several requests from citizens to address vehicle crashes, near misses, and speeding along Maurice Ave. The Team wanted to not only solve these issues but also wanted to make the street safer as a Neighborhood Greenway route. After analyzing the data they had collected, the Team determined that installing the new lightweight traffic calming circles at Central Ave., Woodworth Ave., and Hastings Ave. with stop signs installed at Sussex Ave., Kent Ave., North Ave., and Beverly Ave. would be the best solution at this time. See project drawings here.