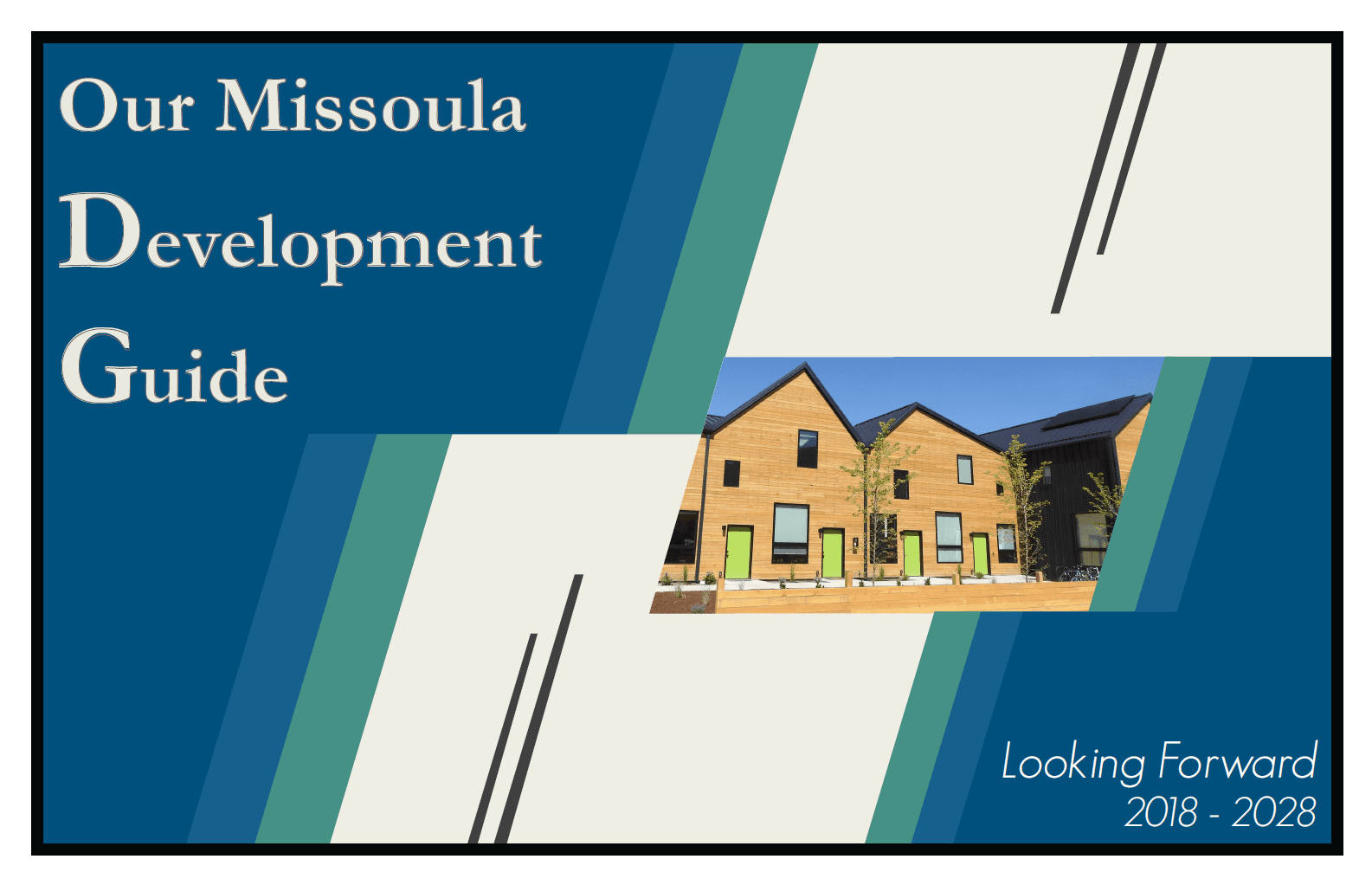 Read the newest Our Missoula Development Guide above.

The population of Missoula has been growing at a rate of 1–2% over the past ten years which is reflected in the annual average of over
600 permitted residential dwelling units filed with the City according to the 2016 - 2017 UFDA Yearbook & 10-Year Review. This “Our
Missoula Development Guide: Looking Forward” report continues UFDA’s legacy providing a new Development Model intended to replace
the previous Residential Allocation Map to more definitively identify locations within the study area that have capacity for quality living
opportunities. Some key results of this analysis follow:

The Urban Fringe Development Area (UFDA) Project was started in 2008 as a way to provide information regarding residential development within the Urban Service Area (URSA), both in terms of past trends and future possibilities. UFDA projected how much residential development would likely occur in the coming years based on the building permits approved in the previous seven years. These projections were then analyzed with regard to land available for development and the density at which that land could develop according to current zoning. The potential new residential development was reviewed in the context of three different growth scenarios and the community determined to emphasize the development potential based on a focus inward scenario consistent with transportation planning. The goal was to provide background development information to enable planning for 15,000 new residential dwelling units over the course of the next 20 years (through 2028). Since the beginning of the UFDA Project, regular yearbooks have been produced to track residential development activity and associated impacts and benefits to many of the City’s public facilities and resources.

This analysis was refined with small changes in methodology over the next 10 years. In 2018, the project was redesigned to complement the City’s Our Missoula Growth Policy (adopted in 2015): this became Our Missoula Development Guide (OMDG). OMDG accounts for not only where an expected 6,500 new dwelling units could be built over the next 10 years (again through 2028), but also how suitable different areas of the City are for residential development according to the stated goals in the Growth Policy. The different degrees of suitability and opportunity were determined by the proximity to services including utilities, grocery stores, transit, and others. This can be thought of as a measure of where development should occur over the following 10 years according to Growth Policy goals.

The stated goals were to determine where 6,500 dwelling units could be built over the next ten years and where would be the best places to build them.

Another measure included in this project is that of entitled lots. These are the lots already approved for development that have either yet to be platted, or have been platted but are yet to develop. These entitled lots were analyzed based on the same suitability metrics as other parcels in the study area capable of development.

Combining the opportunity for development in the study area with the entitled lots in the study area results in an overall understanding of where 6,500 units can be built in the urban service area that supports our community vision and need for growth. The Our Missoula Development Guide is a useful tool to inform decisionmakers on where in the area residential development should occur.